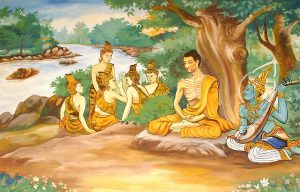 Ascetic Bodhisattva Gautama with the Group of Five

I believe that the 4 Noble Truths are the most written about subject in all of Buddhism. They are the first subject spoken about when the Buddha was convinced to teach the Dhamma, and one of the last things he mentioned just before his death. They are the very core of the Dhamma itself and all the writings and commentaries over the last two millennia have those 4 Truths at their heart.

The 4 Truths were first spoken of to the 5 ascetics the Siddhartha had spent time with before he had the realisation that the ascetic way may not be the true way. He had lived for 35 years in the lap of luxury, then spent several years in the forest trying to find an escape from the daily troubles of human life, such as poverty, ill-health and death. Once he had attained enlightenment. and been convinced to teach what he knew, he returned to those five ascetics, and it was the 4 Noble Truths that he spoke of. Now 2500 years ago these Truths were revolutionary. Their very ideas were never heard of before and the effect on the five ascetics was extreme.

It would seem prudent now to introduce the Sutta in which the newly formed Buddha announces the 4 Truths to the world. The Sutta is known as the Dhamma­cakkap­pa­vat­ta­na­sutta, or the Setting in Motion the Wheel of the Dhamma.

It can be read, or downloaded here.

Other pages dealing with each truth individually follow below.

Of course it would be remiss of me not to mention the Noble Truths themselves, and the following quotation is taken directly from the translation of the Dhamma­cakkap­pa­vat­ta­na­sutta available on this website.

This is what the Lord Buddha said:

“And this, monks, is the noble truth of the origination of stress: the craving that makes for further becoming — accompanied by passion & delight, relishing now here & now there — i.e., craving for sensual pleasure, craving for becoming, craving for non-becoming.

“And this, monks, is the noble truth of the cessation of stress: the remainderless fading & cessation, renunciation, relinquishment, release, & letting go of that very craving.

The word ‘stress’ used in this rendering of the Truths is more often termed ‘suffering’. The Pali word used in the original documents is ‘Dukkha’. It has manifold meanings, none of which can be satisfactorily translated into English. The English equivalents tend to be too harsh or vague. I listened to a pod cast a while ago by one of the monks at the Amaravati Monastery in Hertfordshire, UK, and he came up with a translation I think is about as satisfactory as one can get, and that is that Dukkha can mean ‘unsatisfactory’.

Anything unsatisfactory can lead to stress, disappointment, heart ache, sadness, despair and such like. Basically it leads to suffering of some form or other, whether it being the suffering induced by your can opener going on the fritz just when you want some beans on toast, to the horrors of nuclear genocide. Dukkha covers all and every emotion between those two extremes.

So it can be seen that the 4 Noble Truths say an awful lot in a very short space. There is much to meditate on, and many a practitioner has spent their entire life progressing no further than those 4 Truths. That does not diminish their progress at all, because all of the Buddha’s teachings are held within those four simple sentences.

I will be looking into my library and trying to find some suitable eBooks to make available that concentrate of the 4 Noble Truths and perhaps expand on the ideas and concepts they involve. As I find and upload them I will make a note of them on this page but also create dedicated eBook pages on the main menu at the top of this site.

Further reading on the individual truths can be found here:

Until then… May you all attain Nibbana.

"Just as a deep lake is clear and still, even so, on hearing the teachings and realising them, the wise become exceedingly peaceful."Dhammapada, verse 82